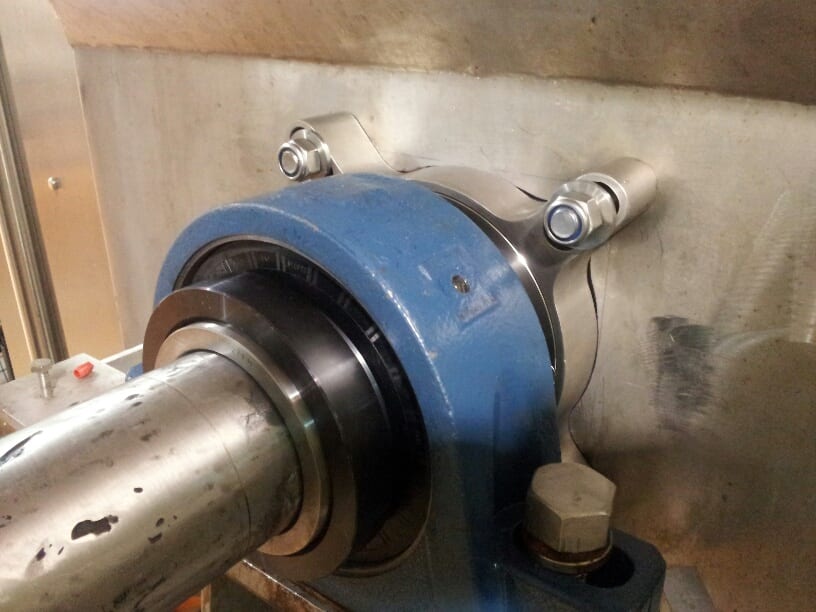 Servicing the food industry into our 20th year.

Project scope was to replace two old seals which were leaking product out of the ribbon blender tank into the bearing cavity.
The leaking product was causing the bearings to fail unexpectedly and prematurely. In this situation bearing failure and the resulting downtime was costing over $10K in parts and repair labour alone.

The old seals were replaced with 2 7850 616SS CinchSeals which offered these 3 benefits:
1. Has allowed for repair or replacement within an hour because the seals can be removed without removing the bearings. The seal internals have been made in a split construction to allow this. This significantly reduces downtime and repair labour.
2. The air purge creates an air seal which forces pneumatic pressure on the sealing faces and FDA rotor cups to keep constant pressure on the seal as it wears. The air keeps product in the tank, resulting in a safe and clean work area.
3. These seals are designed for easy maintenance, and can be disassembled during non-working periods to be cleaned.

An added advantage was the ability to allow for slight shaft misalignment, meaning if the bearing wears that the seal will still perform its role.
When asked about seal performance, Nathan Minster, the Maintenance Unit Leader had this to say,
“Results have been instant. We have had no product leak since the new seals were installed.”